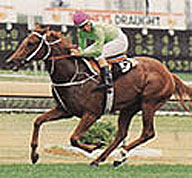 It’s been a question that many a punter & racing fan would have pondered at one point or another while watching the local races down at the track or watching a huge international racing day / carnival from across the other side of the globe on live telecast.

For 100’s of year’s since organised thoroughbred races were commissioned, no doubt there would have been more than just an odd few heated arguments, pondering the answer to a seemingly simple question:

Who is the best jockey in the world?

The problem was that there was never a right or wrong answer to the somewhat intriguing question, as it was a totally & purely subjective question where a punter’s inevitable answer would be his favourite hoop from his home town or the rider who had just ridden the nice priced winner to victory that he’d backed.

However after the roaring success of a year long competition created by the “International Federation of Horse Racing Authorities” in 2008, known as the “LONGINES WORLD’S BEST RACE HORSE RANKING’S”. It was inevitable racing fans would want to know not only who the world’s best horses were they wanted to know also who was the world’s best race rider.

It took a while but and much after much debate & internal planning about what the competition rules would be & how the contest would work properly by providing equal point scoring opportunities  & fairness for all jockey’s no matter which racing jurisdiction they called their home base.

In 2015, the inaugural “LONGINES WORLD’S BEST JOCKEY” competition was launched, with every single jockey from every racing jurisdiction fully eligible to take part.

The beauty of the global jockey challenge, was in the simplicity of it’s rules which were simplified right down from original idea’s to ensure horse racing enthusiasts could keep up to the minute with the progress of the competition.

THE RULES WHICH HAVEN’T BEEN ALTERED SINCE THEIR INITIAL CREATION IN 2014 ARE AS FOLLOWS:

(i) The LONGINES WORLD’S BEST JOCKEY award is given to the jockey who has achieved the most points in the 100 highest-rated Group 1 and Grade 1 races as established for the year by the LONGINES World’s Best Racehorse Rankings Committee. The scoring will incorporate races from 1st December of the previous year until 30th November of the current year.

(iii) Provision’s for points distribution in the event of a dead heat for either 1st, 2nd or 3rd were also made in that event a dead heat amongst the top 3 should occur in any of the 100 points earning races.

Super Star Australian jockey Hugh Bowman is a short priced, odds-on favourite to continue his stellar 2017 form for the rest of Year & become not only the first Aussie to be awarded the prestigious honour on November 30 by the “International Federation of Horse Racing Authorities” at the gala awards night, but he’d also become the first non European winner in the competitions 4th year.

Bowman know’s he’s had a brilliant 2017 to date, mainly thanks to his world champion mare Winx, but despite the comfortable 20 point buffer he holds over Ryan Moore currently, he knows Moore will keep on winning big races around the world, so Bowman admits he will have to return serve & keep piling on the points, if he’s to prevent the Englishman, Ryan Moore from winning the coveted award for the 3rd time in just 4 years on the concept.

This great new concept that has been terrifically received by jockeys world wide, and it’s already widely regarded amongst the jockey fraternity as the highest single individual honour available to every jockey in the world.

“Hughy” knows he’s still got plenty of winning at the Group 1 level to do for the remainder of 2017 if he’s to take out the gong despite the handy points buffer he has at this point in time which is well past the half way point of the 2017 competition.

Ryan Moore will take a power of beating, as was evidenced by the mammoth 166 points he accumulated in taking out the 2016 award. Christophe Soumillion who was the 2016 runner-up was an astronomical 68 points off the champion in 2nd spot.

However, Bowman has several aces up his sleeve coming into Spring time in Australia. He’ll again ride champion mare WINX at all her starts & that appears that it’ll convert into easy points for Bowman who has partnered the mare at the last 16 wins out of her stunning 17 consecutive victories,

It’ll go right down to the wire but our bipartisan view on the race for the prize, is that with Winx in his corner Hugh will prove to hard to run down even with three elite jockeys still within a points striking distance:

The top 10 leaderboard makes pleasing reading for the Australian horse racing industry with, 4 of the spots filled by Australian born & bred jockeys:

Progress of other Australian riders outside the top 10:

The 2017 instalment of the “LONGINES WORLD’S BEST JOCKEY” championship has been by far and away the best collective effort by our Australian contingent of jockeys, who have been able to rack up plenty of meaningful points throughout the 1st, 2/3rds of the 2017 points race.

Whether they’re based at home or abroad. It’s clear too see that Australia has the most amount of jockey’s earning points of any country globally.

We really do produce the world’s best riders as a collective whole, I believe whole heartedly – I’m not just wearing my Aussie rose tint glasses.

It’d be terrific for Australian racing if “Huge” Hughy Bowman could go on and build on his buffer to take out grand 1st place award, because he’s long been one of our favourite son’s.

He’s a humble outback kid hailing from country New South Wales, if he could come from such humble beginnings and go on to become the official Best jockey on the Globe he’d inspire hundred’s of country kids, who would dream of travelling a similar path.

3yo making his racetrack debut for Team Hawkes off the back off a super impressive trial.

Drawn a bit sticky but has the speed to burn across and either lead or be outside the leader.