VIDEO: IS THIS UNDEFEATED 3YO COLT THE NEXT WORLD SUPERSTAR? DUBAI WORLD CUP?? KENTUCKY DERBY?? 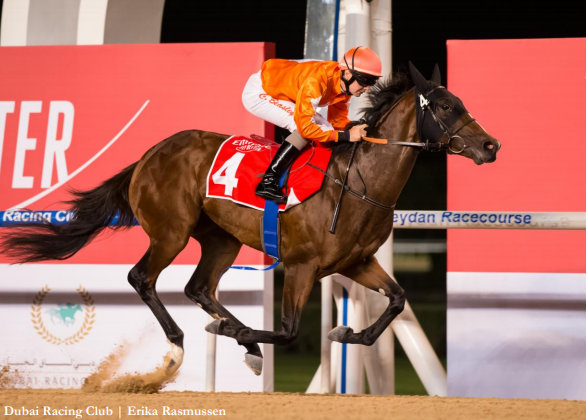 The Phoenix Ladies Syndicate, an offshoot of the Phoenix Thoroughbreds group that campaigns Belmont Stakes runner-up Gronkowski, is right to have some Triple Crown race dreams of its own after Thursday’s $100,000 UAE 2000 Guineas Trial.

Walking Thunder moved his record to 3-for-3 in the most impressive fashion, showing gate speed from the outside and No. 15 post position, stalking the pace and taking over as they turned for home.

The Violence colt went on to win by nine lengths at Meydan, setting him up to continue on toward the March 30 UAE Derby (G2), which awards 2019 Kentucky Derby qualifying points on a 100-40-20-10 scale to the Top.4 finishers.

“He’s a different class horse,” said trainer Ahmed bin Harmash. “…It looks like the horse can travel the Derby distance.

Bin Harmash also conditions for Phoenix Ladies the 3-year-old Superior, another winner during his juvenile season at Meydan who could point toward races such as the 2000 Guineas (G2) on Feb. 7 and UAE Derby.

Walking Thunder, a Florida-bred purchased for $42,000, was off at 3-1 on the U.S. tote Thursday. His victory came at the cost of Royal Marine, a Group 1 winner for Godolphin on the turf who broke while odds-on. Royal Marine raced wide to avoid some of the kickback but did so at one pace, finishing fourth.

As for the winner, jockey Connor Beasley said he let Walking Thunder “find his feet” from the outside post. Kicking away from the gate, the colt crossed over all but one in the field, the pace-setting Power Link.

“As soon as I asked him off the bend there, he felt like he put it to bed in two strides, to be honest,” Beasley said. “He’s just so very professional in his mannerisms — the way he goes to the start, just everything. I haven’t rode many good horses, but to me he feels like a good horse.”

Walking Thunder completed a one-turn mile on the Meydan dirt in 1:38.43.

“Off that, I’d dare say,” said Beasley, asked if the horse can go even farther. “Obviously it was a bit of a question mark these two runs previous. Today he settled a lot better just having a bit more of a rein. I’d say…he never stopped, and I couldn’t pull him up after the line.”

HERE’S AN ARTICLE WRITTEN ON DECEMBER 17 LABELLING HIM A KENTUCKY DERBY CONTENDER.

HOW RIGHT MIGHT AUTHOR JONATHAN LINTLER HAVE BEEN. THE WORLD IS TRULY HIS OYSTER & HE THRIVES ON THE DIRT!

Whereas Phoenix Racing made an impact on the 2018 Triple Crown with Gronkowski second in the Belmont Stakes, the Phoenix Ladies Syndicate, an offshoot designed to increase female participation in Dubai, could have a 2019 Kentucky Derby prospect or two on its hands.

Walking Thunder, a son of Violence trained by Ahmed bin Harmas, is 2-for-2 after striking Dec. 6 in a 1-mile race at Meydan. Next, the colt will target the UAE 2000 Guineas (G3) on Feb. 7, according to the latest batch of Dubai Racing Club notes.

Superior, also a debut winner for Phoenix Ladies, will contest January’s 2000 Guineas Trial, keeping stablemates separated on the lead up to the UAE Derby (G2), which on March 30 awards Kentucky Derby qualifying points on a 100-40-20-10 basis to the Top 4 finishers.

“Part of the plan was for him to get an education — put him behind and take the (kickback) to see if he could handle it before he faces it in bigger races,” Amer Abdulaziz, principal of Phoenix Thoroughbreds, said of Walking Thunder’s most-recent effort. It followed a seven-furlong debut win, with the UAE 2000 Guineas a next step.

Jockey Connor Beasley “did an amazing job and kept him in the right place and then he just took off,” Abdulaziz added. “It was very impressive. The Phoenix Ladies have some very good young horses and we also look forward to the older Phoenix big guns coming for the Carnival.”

Those big guns, by the way, are Gronkowski and Axelrod, the soon-to-be 4-year-old colts who will prep locally for runs in the Dubai World Cup, also on March 30. Axelrod has one more domestic start to make in Santa Anita’s Dec. 26 Malibu Stakes (G1) before both horses are turned over to trainer Sandeep Jadhav in Dubai.

Gold Town won the 2018 2000 Guineas before heading into a UAE Derby matchup with Mendelssohn, who romped. Before that, Thunder Snow completed the 2000 Guineas-UAE Derby double in 2017.

Beasley told the Dubai Racing Channel after the Dec. 6 victory that Walking Thunder’s “attitude is unbelievable for a 2-year-old who’s only run twice.” Pamela Cordina, of the Phoenix Ladies syndicate, added that, “He has us dreaming of some big targets during the Carnival and with luck we can win some nice races.”

Both Walking Thunder ($42,000) and Superior ($50,000) were relatively cheap purchases as 2-year-olds at the Ocala Breeders’ Sale last April. We’ll see moving forward if they can hang with the likes of Royal Marine, a Godolphin runner — and already a Group 1 winner — who could also target the UAE Derby.