The story of Bernborough and his rise to fame, lumping massive weights to heart stopping wins, was straight from the script of a Walt Disney film. The most exciting galloper since Phar Lap, Bernborough gave racing the fillip it needed in the first year after World War II. His finishing bursts from well back in the field had punters roaring. Not even the greatest ever, the mighty ‘red terror’ Phar Lap attracted such consistently big crowds. In 1946 alone, he won a baker’s dozen (13) straight top line races.

Foaled in Dalby, Queensland, in 1939 “Bernie”, or the “Toowoomba Tornado” as he was to be affectionately known, was supposedly by Emborough out of a 20 year old broodmare named Bern Maid. As no DNA tests were done back then, racehorses could be by anything other than what they were supposed to be by.

Bernborough’s original owner was Frank Bach, but he was very much on the outer within the Queensland Racing industry after his involvement in a ‘ring in’ scandal a few years before Bernborough was even foaled.

After winning four races as a two-year-old locally at Toowoomba, the Toowoomba Tornado was taken to Sydney, but still dogged by queries over his owner’s integrity, the AJC refused the horse’s nominations and he was unable to race there. So it was back home to Toowoomba without a single run south of the border. Back at home he continued to set the track alight and was on sold to Andrew Hawden, who had a much better reputation in racing circles. Another six wins meant Bernborough was being asked to carry huge weights, and that figure reached 10 stone 12 (69 kgs in today’s racing parlance). That was enough for Hawden and out of protest for the weights he was getting – as much as anything else – the horse was sold. The new buyer was happy-go-lucky Sydney nightclub entrepreneur Azzalin Romano. He purchased Bernborough for 2600 guineas and immediately sent him to Randwick trainer, Harry Plant.

His Sydney career got off to a somewhat forgettable start when he ran fourth in a restricted class race at Canterbury on December 8, 1945. Romano, ever the optimist, forgave the horse, but jockey Noel “Digger” McGrowdie was not so lucky, as he was replaced by Sydney’s leading hoop Athol Mulley. Two weeks later with Mulley on board, Bernborough atoned, when cruising to victory in the time honoured Villiers Stakes at Randwick by nigh on six lengths, officially starting at 3-1. Such lucrative odds were very seldom bet by bookies after that, as Bernberough went on an amazing winning streak of 15 races. Three of the more amazing wins during that run were the Newmarket Handicap over 1200m down the Flemington straight where he was asked to carry the top weight of 58kg (9st 2 pounds). The Doomben 10,000 back in Brisbane, over the traditional 1350 metres with 63kg (9st 13 pounds) and on a quick back-up the Doomben Cup over 2200m with a near back breaking 65kgs. The Newmarket win in particular stood out as it almost defied belief. With a furlong and a half of the straight six to go, Bernborough sat in 18th place. But in the final furlong, in which he was clocked to run an amazing 10 seconds flat, Bernie got up to score by a neck.

It was October 1946, Caulfield Stakes day and Bernborough started prohibitively short at 8-1 on and stretched his sequence to 15 straight wins, defeating handy galloper Columnist. Seven days later somehow 107,167 racegoers packed Caulfield for the running of its showpiece event, the Caulfield Cup. It was obvious why the fans had turned up, to see their champion Bernborough. Starting at 7/4 despite his huge 64kgs, Bernborough was understandably given a deafening roar as he entered the mounting yard. However it was not to be his day, as his winning streak and partnership with jockey Mulley ceased when he ran a gallant fifth.

When Bernborough stepped out in the Mackinnon Stakes on Derby Day, he was poised to become the highest stakes earner ever in a calender year. His anticipated victory in the 1400 guineas prizemoney Mackinnon Stakes would have also seen him enter the top 20 earners of all time but his popularity hadn’t waived an ounce after his failure in the Caulfield Cup. Alas it wasn’t to be. With Bill Briscoe having his first ride on the champion, disaster struck as he broke down three furlongs out when about to launch a strong claim on eventual six-length winner, the champion mare Flight. Bernborough’s near front leg hung limply and the crowd immediately feared the worst, that being that he would have to be euthanised there and then. But ever the fighter, Bernborough tried to walk on the leg, which was revealed to be a displaced sesamoid as he limped back to his float. To the relief of many, Bernie was saved and when he was finally patched up he went to stand at stud in the United States, thus bringing down the curtain on a 37-start race career, of which he was victorious 26 times.

Romano was unpopular at the time for his decision to sell offshore, but after the horse had won him 25,504 guineas, enough to buy not one, but two, water front Sydney homes, Romano said he wanted the horse to live like royalty which he claimed would happen as Bernborough was sold to film tycoon Lois M Mayer of MGM, who owned a stud.

The Toowoomba Tornado is one of the best horses to ever be produced in the ‘sunshine state’. He will long be remembered for his heart and courage under big weights in big races when the pressure was right on. So hard was he to beat the phrase “he could get Bernborough beaten in a maiden” was coined, in reference to punters and/or tipsters who seemed to never have any luck or success. 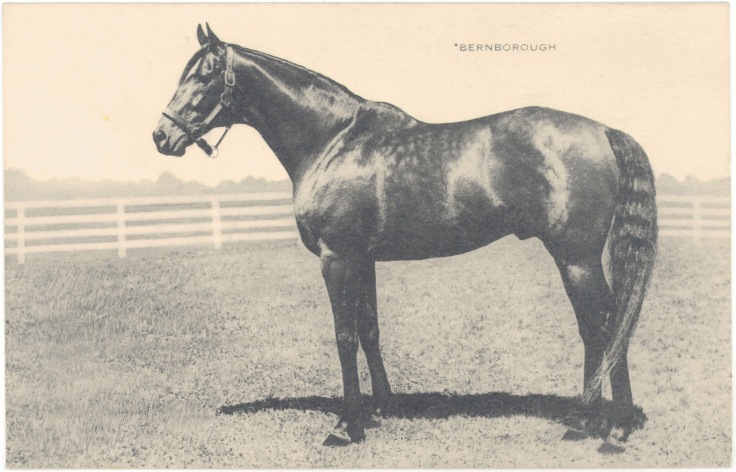